The Westportif cycling challenge is now in its second year and just launched its 2014 schedule that promises a weekend of superb cycling festivities on the 18th, 19th and 20th July. Westportif are delighted to that the cycling event is now part of the inaugural Skoda Cycle Series, in association with INM Regional’s. The Škoda Cycle Series has something to suit everyone, whether you are a novice cyclist and looking for a new challenge, or someone who can easily notch up 40km just for fun. The concept of the series is that all of the events are chip-timed however; these events are not races and the idea behind the event is to help leisure cyclists improve. Only the 160k and 80k Westportif routes will be chip timed, the 40k route will not be. 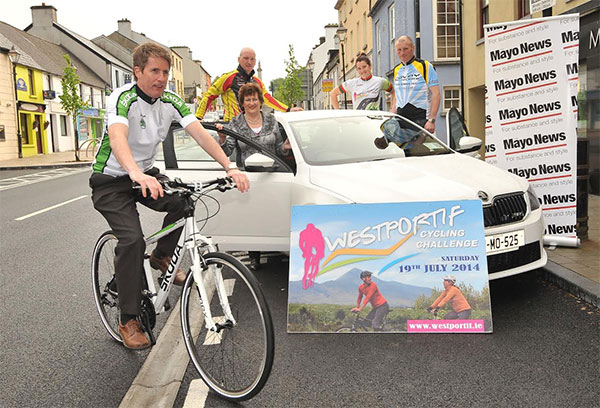 At the launch Dermot Langan of Westport Town Council acknowledged the support being offered by the business community and local authorities along with the relationship with Console. Anthony Harrison and Padraig Marrey, chairmen of Westport Covey Wheelers CC and Ballinrobe CC respectively, gave a synopsis of the initiative stating how the main event will be a 160km sportive cycle called ‘Westportif’ with an optional route of a 80km ‘Ramble round the Reek’ and a beginner route of 40K. All options are non-competitive and are suitable for leisure cyclists of all abilities with the focus being on participation, admiring the scenery and enjoying the fresh air. For the more adventurous racing cyclists there will be a criterium race around the streets of Westport on Saturday evening from 8-10pm providing some enthralling entertainment. On Sunday morning there will be a Family Fun cycle on the Greenway, with no set distances this will suit everyone. 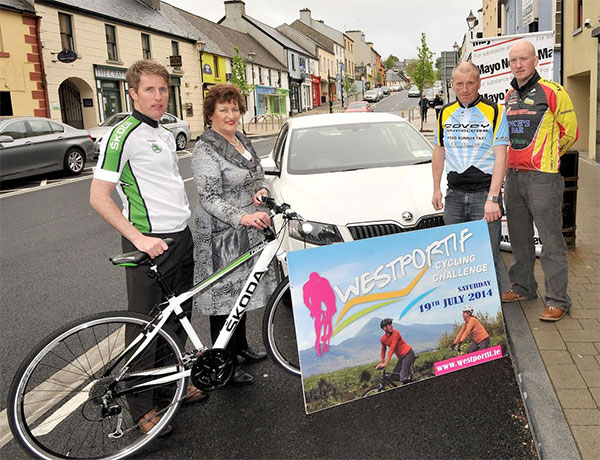 Westport has great infrastructure in place to host such an event and with similar sportive events attracting large numbers of cyclists the town is well placed to accommodate the cyclists. The chosen routes tend to be quiet with regards to traffic yet well surfaced and with the picturesque setting of rural Ireland not many cyclists will be looking down!
Brid O’Connell of Console also gave her support in promoting the event, and by partnering with Westportif both parties hope to raise valuable funds for the prevention of suicide.

Posted in hidden
Scroll To Top